I moved to Williamsburg from the East Village in 2016 because I wanted to pay less rent, shorten my commute and be around a lot of bars and restaurants.  After a year of living Williamsburg, I’ve heard more than my fair share of hipsters gentrifying jokes.  What is interesting about the area is the sense of new-ness in the area.  Looking around, some areas are nothing but apartment building made out of the same metal and glass facade.

Building a time machine with Google

I didn’t live in NYC in 2007, but I am lucky enough to have the next best thing, Google. By using Google Maps’ time machine function.  When in street view, move your cursor to the top left of the screen until you hover over the grey box (in the picture below it says 250 Bedford Ave).  In the bottom part of my box, I can see a clock that labeled, “Street View – August 2007”.  This will open a timeline of every time that Google Street Car has passed by your location.
Note: My goal was to use jQuery to make a before/after effect of the image, but  jQuery and WordPress don’t play well together (it caused my entire site to stop loading), so I published this In a format similar to Business Insider (one big list with next to no insight).

Bedford Avenue is now the heart of Williamsburg, but before that it was full of decaying building.  In the ten years since that photo was taken, an Apple Store, Equinox, Whole Foods and Duane Reade were built in this exact location.

This area would be unrecognizable if it weren’t for the houses on the right hand side of the screen.  In eight years, three huge apartment buildings were built in the empty lots and warehouses of East Williamsburg.

No major architectural changes here, but we can see the cities move to make NYC streets more pedestrian friendly.

This was an amazing picutre.  Before most of the major development we could see the Manhattan skyline between the old buildings covered in graffiti.  In the following eight years, there were new building on every block going all the way to the East River.

I wanted this post to go out to show people how much this area changed in a short timespan. What I would love to look at next is the affect on real estate prices, rent and GDP of the area. 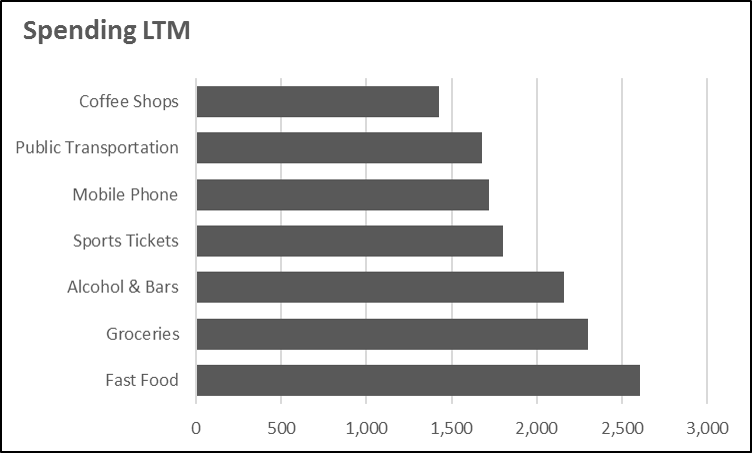 Lifetime value is an important marketing concept which describes the amount of money a business can expect earn from a customer.  For this post, I’ve decided to calculate how much I’m worth to a business over the last 12 months using all my spending using Mint.com.

BLACK STAR COFFEE, $1,025: The business that surprised me the most was Black Star Coffee.  The average meal for me is a croissant, and a double cortado on weekdays, and a siracha egg sandwich and iced coffee on weekends.  Before looking at the data, I expected my monthly spending to be around $40.   Using Mint, I saw that over the last 12 months, I spent over $1,000 on 136 purchases (average cost of $7.54).  Clearly I was way off, I was blindly handing my credit card over without actually doing the math in my head, of how often I frequented this coffee place.

I like their croissants, and breakfast sandwiches a lot, I highly encourage people to try it out.  But I can’t justify spending at a conservative estimate, $400 a year on coffee from one place.  I could buy a coffee machine for $40, and pay an average of $0.40 for a freshly brewed cup of coffee, saving myself around $3.50 per cup.

TRADER JOES WINE SHOP, $409: Over the last year, I’ve really gotten into Trader Joe’s “two buck chuck”, officially known as Charles Shaw Wine, which is available for $3 for one bottle.  From the data, I make a bi-monthly trip to the Trader Joes wine shop, where I pick up two bottles  the first is usually an $8 Malbec, and the second is either a bottle of two buck chuck, or a second $8 Malbec, all of which leaves me with an average basket of $16.35 (incl. 10% NYC tax).

I expected my spending to be much higher with Trader Joes Wine, I was under the impression I visited more often and spent more in an average visit.  In terms of cost reduction, there’s not much I can except stop drinking.  In my opinion the wine is a great value, it doesn’t taste like it’s two dollars and it’s better than most beer.

Fast Food $2,606: This is pretty embarrassing for two reasons. First these costs are mostly avoidable if I brought lunch, or stopped using Seamless.  Bringing lunch twice a week could save $1,000.  Second, I spent less on groceries than fast food.  Every time I buy lunch, I spend an average of $10.47, but cooking at home could cost me around $2 – $3 which is an 80% decrease in costs.

Sports Tickets $1,804: I’m a huge sports fan, over the past 12 months I went to the French Open, US (Tennis) Open, NHL Rangers games, and several soccer games.  Over the next 12 months I expect this to remain the same or slightly increase because I’d like to attend more NHL games, and an NFL game.  It’s not cheap, I spend around $150 dollars on each event (excl. soccer).

Television and Streaming $549: I use Sling TV, HBO Now, and Netflix Streaming for all of my TV and streaming.

Does this satisfy all my viewing needs?  Technically yes, the only thing I’m missing certain sports networks like YES, FS1 and MSG.  The channels that I do watch live are available in Sling and HBO Now: ESPN, Comedy Central, Adult Swim, HBO, and I can watch certain sports using a $15 (one time cost) digital TV antenna.

Some areas were eyeopening.  I spend way too much on greasy Seamless food and lunch.  If I do spend money, it should be on nicer restaurants that I visit with friends.  Coffee was another unnecessary expense that I regret.  Coffee was usually ordered with a snack or sandwich which often doubled the cost.  For the next 12 months I should focus on brewing my own coffee, eating out less for dinner and bringing my lunch which could easily save me $1,000.  One area that I don’t expect to change, is sports tickets and alcohol.  I really enjoy seeing sports live and I don’t expect to change that anytime soon.  I would like to spend less than $2,000 over the next year, but realistically with dates, happy hours and NYC’s obsession with cocktail bars it will be hard.  I think it makes sense to track these expenses closer in Mint.  I’ve set up budgets which I’m trying to follow a little more closely, and I’ll try and do a quarterly post-mortem of expenses to see if I followed through on the cost reductions.