I used my iPhone to record every step I took from November 2014 to December 2016.  I found some interesting trends after looking at average daily temperature, day of week, and location.

After downloading the data from my phone, I compared my steps to the daily average temperature (source: NOAA) to see how temperature affected my activity.  On ‘hot’ days (temperature higher than 83 degrees), I averaged more than 11k steps.  This is because I like to take advantage of the warm weather and run 3 – 6 miles along the East River park on weekends, and squeeze in a couple of 2 – 4 mile runs on weekdays.  What’s interesting is that there seems to be a baseline step amount of 8,700 steps, meaning, that no matter the temperature, I always needed to walk 8.8k steps.  I cover this later, but this was likely because of my apartment’s distance from the subway.

The graph below is is probably my favorite representation of temperature and frequency.  I found this graph type when I was looking at a DC Bike Share on Kaggle.com.  On the x-axis is the temperature, the y-axis is my steps, the colors represent the type of weather (cold vs hot) and each marker repersents a day over the last 2+ years.  Like the previous image, you can see a slight increase in daily steps as the temperature rises.

From 2014-2016 I lived in three different places, Connecticut, Manhattan, and Brooklyn.  My most active days were when I lived in the East Village, where the closest subway was almost a mile from my apartment.  Just getting from my apartment to work, meant that I walked almost two miles roundtrip.

Things changed when I moved into a new apartment in Brooklyn.  This apartment was much closer to a subway, and my steps reflect it.  Keeping all things equal (steps taken on the way to get lunch, running/gym) we can assume that I take 2,000 fewer steps a day.

I took a look at the average amount of steps I took each month.  During the spring/summer months we notice that I took over 10,000 steps! 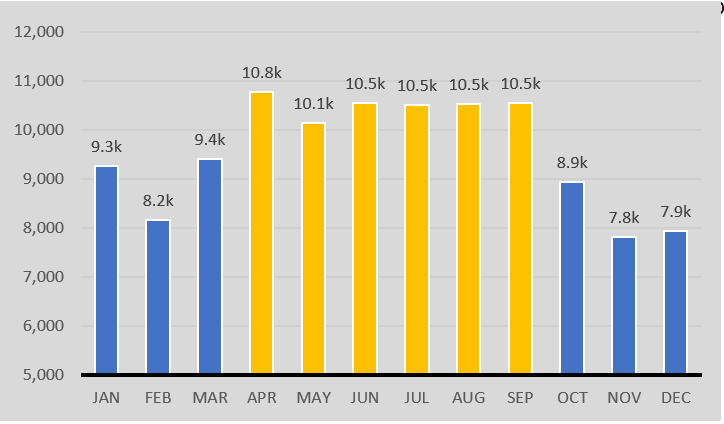 What hours did I walk the most in 2016?  To no one’s surprise, I walked the most during my weekday commute 9am, 6-8pm.  As mentioned earlier, I walked almost 1 mile to the nearest subway which would account for the 800+ steps I took during those times.

How do you track every step you take?

First you’ll need an iPhone with the Health app installed, which allows your phone to track every step using movement, similar to a pedometer.

Next, you’ll need to download this app: QS Access which will allow you to export a CSV of your daily steps onto Google Drive.